Apple Has Been a Surprising Game-Changer for My Family 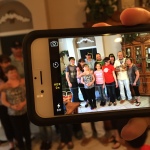 If I had known just how much more convenient messaging could be, let alone the ease of monitoring my teenager’s device usage, I would have begun my switch to iPhone years ago.

iMessage alone (which allows a message to show up on the iPad, iPhone, or Mac) has been worth the premium that I decided to pay for the Apple product. I know that there are work-arounds for this on other devices, and I know that from a pure “hardware junkie” standpoint you can get more device with Android, but in my house I’m the parent responsible for digital monitoring and I’m finding that Apple makes this very easy.

I switched to Sprint prior to Christmas, saving enough $ to put the two teenagers at different high schools in smartphones that enable us easily to communicate. One of those got an iPhone; the other got a hardware-superior Android. (At the time I was really reluctant to even get the younger a phone. We had planned to have them buy their own phones when they got jobs but the pure scheduling madness with five kids (4 of ours + 1 exchange student) at three different schools, two parents working more than full-time, and two cars made the mobile device begin to cross over from the “pie in the sky ‘want'” category to “this is getting close to a ‘need’.”)

At the time I got the phones I was driven mostly by “need” (get the teenagers in phones so we can communicate) + bottom line (I wanted to decrease my monthly expenses, if possible.). Switching from Verizon to Sprint via the “Cut my rate in half” promotion allowed me to save money and add two smart phones to the plan while moving my wife and I into Apple devices for the easier iMessage communication. We decided to suck it up and reward the older teenager with an Apple phone since her grades were good and since she was about to start driving, and given the temptation to text and drive, I thought, “All things considered, having Apple’s “Siri” which allows easy touch ID and voice-activation will be safer.”

The other teenager won’t be driving for a couple years and we debated just getting a basic call and text phone, but Sprint was offering a “good deal” on a nicer Android phone which allowed for a lot more functionality, so–it was Christmas–I got suckered into it. Even paying more than I planned for that phone it was still $200 cheaper than an iPhone and that (Remember, bottom line cost was driving this.) would’ve increased my net expenses on cell phones.

In the mean time, with my wife and daughter and I in iPhones and with me as “Family Sharing” administrator, I get messages when the kid wants to add an app on the iPhone. This allows me to know easily what’s going on, so I can say to myself and her, “Sure, that’s fine” or “Nope, you don’t need that stupid Kim Kardashian game.” I don’t easily have the ability to do that so easily (at least as far as I know) on the Android phone. The parental controls issue is a significant one that makes Apple a lot nicer for me.

The other issue, at least at this point, is iMessage. I’m a pastor. I have a phobia about my phone being on and going off when I’m in the pulpit or something, so I always keep the thing on vibrate, which means that I don’t always hear when a messages comes in. However, with iMessage and an iPad nearby or when I’m on the Mac when I get a text message it shows up on the other devices. That’s handy when it’s your wife or daughter trying to get a hold of you. It’s SO handy, I’ve found, that–knowing what I know now–I would have gone a bit over budget and given the younger teenager an iPhone, too. No, he doesn’t deserve it. Yes, it’s really bloody expensive. True, it’s not as much device hardware-wise as the Samsung or LG, but–Good gravy!–as a family, working together, the Apple devices are more friendly, safer, and convenient. That, I suppose, is what enables Apple to have people pay the premium.

I’m even considering paying the re-stocking fee, eating the cost of the case and screen protector, and putting the other kid in the Apple. All things considered, it’s becoming that valuable to me.