Some Possibilities for the Next “Cana Book Club” Selection

Twice monthly I host the “Cana Book Club” for those who want to “discuss today’s issues with the light of Christ.” My effort is to read outside the usual protestant church book circles and engage writings and ideas that are culturally significant. My goal is to learn from these authors and ideas but to understand them through a Biblical worldview. (I welcome anyone in the area to join us, by the way.)

I am reading a number of books right now, all of which I am finding very interesting and thought-provoking. One of these is Malcolm Gladwell’s book Blink. Here is the amazon.com review: 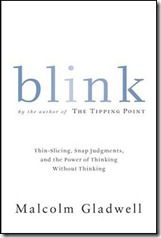 Blink is about the first two seconds of looking–the decisive glance that knows in an instant. Gladwell, the best-selling author of The Tipping Point, campaigns for snap judgments and mind reading with a gift for translating research into splendid storytelling. Building his case with scenes from a marriage, heart attack triage, speed dating, choking on the golf course, selling cars, and military maneuvers, he persuades readers to think small and focus on the meaning of “thin slices” of behavior. The key is to rely on our “adaptive unconscious”–a 24/7 mental valet–that provides us with instant and sophisticated information to warn of danger, read a stranger, or react to a new idea.

Gladwell includes caveats about leaping to conclusions: marketers can manipulate our first impressions, high arousal moments make us “mind blind,” focusing on the wrong cue leaves us vulnerable to “the Warren Harding Effect” (i.e., voting for a handsome but hapless president). In a provocative chapter that exposes the “dark side of blink,” he illuminates the failure of rapid cognition in the tragic stakeout and murder of Amadou Diallo in the Bronx. He underlines studies about autism, facial reading and cardio uptick to urge training that enhances high-stakes decision-making. In this brilliant, cage-rattling book, one can only wish for a thicker slice of Gladwell’s ideas about what Blink Camp might look like. –Barbara Mackoff

I had heard of Gladwell for years but never read anything, then I came across the fascinating video below on TED. The lecture is entitled “Malcolm Gladwell on Spaghetti Sauce.” That’s just an irresistible title, so I watched it. Fascinating, and highly recommended.

After I watched this I purchased the audible version and then found a good discount on the paperback at the local Borders going out to business sale. Even if we don’t read this for CBC I recommend it.

I am also re-reading Good to Great  by Jim Collins and his accompanying monograph, “Good to Great and the Social Sector.” Below is a video clip entitled “Greatness is Not a Business Idea” for those of you not familiar with Collins. You might also be interested in this interview with a church leader.

Here is Collins’ summary from his web site:

This book addresses a single question: Can a good company become a great company, and if so, how? Based on a five year research project comparing teams that made a leap to those that did not, Good to Great shows that greatness is not primarily a function of circumstance; but largely a matter of conscious choice and discipline. This book discusses concepts like Level 5 Leadership, First Who (first get the right people on the bus, then figure out where to drive it), and the Flywheel. (URL)

Jim Collins: "Greatness is Not a Business Idea"

Again, even if we do not read this for CBD, I recommend it.

Another possibility is Marilynne Robinson’s novel, Gilead, which won the Pulitzer Prize in 2005. USA Today’s announcement of the Pulitzer summarizes:

Gilead is written in the form of a letter the Rev. John Ames, in failing health, is writing to his 6-year-old son in 1956. It deals with the minister’s life and the lives of his father and grandfather, both of them preachers. One is a pacifist, the other is a gun-toting abolitionist. (URL) 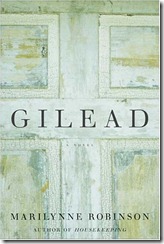 Here is a selection from the audio version that I have been listening to.

And here is a link to an interview on PBS’s “Fresh Air” shortly after the book was published.

To my CBC-ers: We don’t have to read any of these particular selections. I’m just giving an update on things that I have been reading and would love to talk about. I think that I would rather do a novel for summer reading, but I’ll leave that up to you.

Let me know what you think!